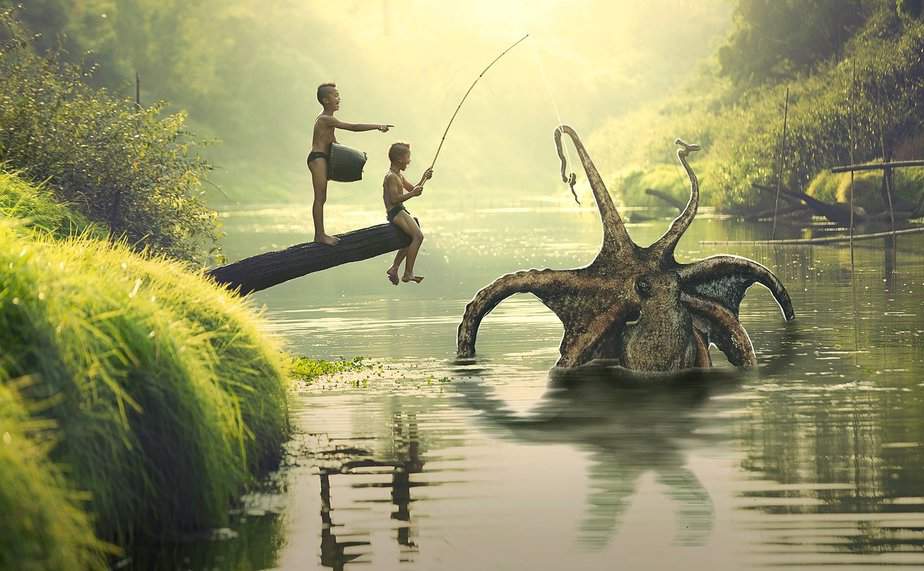 Nowadays, there are all kinds of crazy sports: Germans invented the Wok World Cup, bubble football is becoming a new trend sport and in some places even ostrich races are held. But in the 1960s there was a very special sport that thrilled spectators: octopus wrestling.

Octoptpus-Wrestling – An odd form of sport

Back in 1949, a journalist wrote an article about an 18-year-old boy who would go hunting for the eight-armed animals in Tahiti. He described how the boy would regularly dive into lagoons to kill octopods with spears and knives. This, however, had less to do with wrestling than with a bloody hunt.

One day, when the young hunter went into battle against a particularly large specimen, the octopus caught him on his leg and left the attacker with painful injuries. But thanks to his numerous companions, the octopus was finally killed after all. For the boy, it was exactly this thrill that made octopus wrestling so attractive.

Later, in the 50s and 60s, real octopus wrestling developed into a popular sport. A newspaper report from 1957 described the increased interest in the World Octopus Wrestling Championships in Tacoma, Washington. Members of teams of three took turns fighting an octopus in three runs. First, they would dive unarmed into Puget Sound to find one of the supposed sea monsters. If they found one, octopus wrestling began with the aim of somehow dragging the octopus ashore.

The conditions of the competition stipulated that no diving suits could be worn. Diving equipment, however, was allowed, although it resulted in the octopus wrestler being awarded only 1.5 points instead of three. The largest specimen to be landed at the 1957 World Octopus Wrestling Championships weighed a whopping 80 pounds. More than 200 spectators attended the spectacle.

In 1963, more than 5,000 residents came to Titlow Beach to watch the World Octopus Wrestling Championships. The 111 participants swarmed out one after the other to dive into small caves. There, they stuck their arms in crevices, hoping to grab an octopus. If they succeeded, they pulled at it until its suction cups gave way and the wrestler could tear the animal from its habitat. To then drag the octopus ashore is said not to have been all that difficult any more – the strong decrease in pressure while coming up to the surface had a negative impact on the animals’ condition. So octopus wrestling was hardly a real fight – especially since diving suits had been allowed in the meantime.

What is Octopus Wrestling?

Octopus Wrestling was a sport famous in the 1960s where a diver was grappling with an octopus underwater and tried to drag it to the surface.

Since when does Octopus Wrestling exist?

Octopus Wrestling was first mentioned in a newspaper article in 1949. During the next 20 years it became more famous.

Octopus Wrestling is now illegal in some states in the USA however it is still occasionally practiced in game shows in Japan.