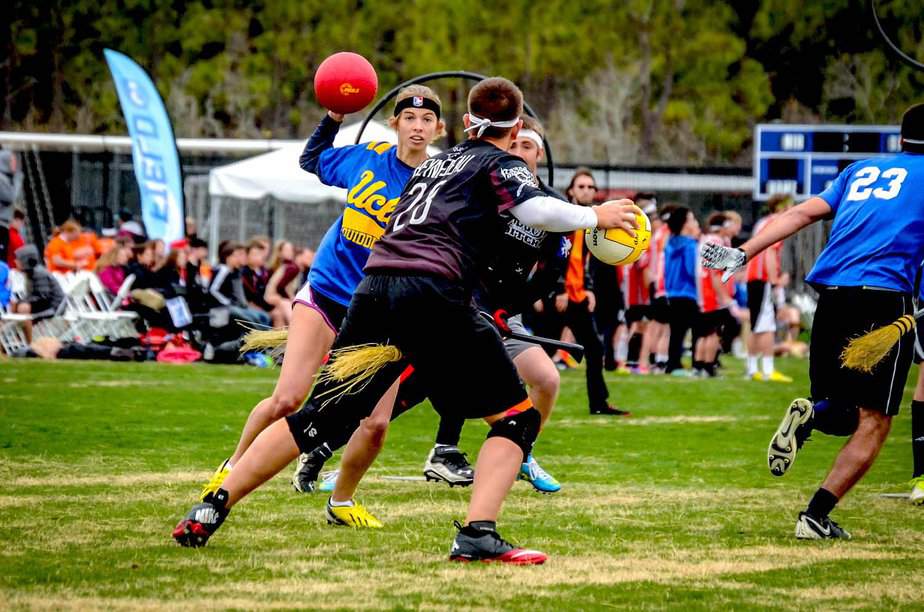 Harry Potter is one of the most successful book series of our time and has shaped our pop culture in many ways. The sport Quidditch which appears in the books is no exception. For several years this sport has been played worldwide as Muggle Quidditch and enjoys great popularity. We tell you how the sport came about, where and how you can play it without a flying broom and what the Golden Snitch is.

In 1997, the first Harry Potter novel Harry Potter and the Philosopher’s Stone was published, becoming an instant worldwide success. In addition to the story about the little wizard, the author J. K. Rowling also invented the fantasy sport Quidditch, which in Harry Potter’s world has a similar standing as soccer in our real world. That is why in 2005 two students, Xander Manshel and Alex Benenne from Middlebury College in Vermont, decided to bring the sport into the real world.

Inspired by the fantasy word muggle from the Harry Potter universe, which describes a non-magical person, they decided to name the sport muggle quidditch. They had no idea how popular the sport they had just launched would become. What at first was only meant to be a fun game quickly developed into serious business. Already in 2007, the first official muggle quidditch game was played, and in the same year the corresponding sports association – the Intercollegial Quidditch Association – was founded.

As the association’s name suggests, muggle quidditch was initially played mainly at universities in the United States. But it didn’t take long for the sport to find enthusiastic supporters worldwide. In 2008, the first official – albeit small – Muggle Quidditch World Championship took place with a total of twelve different teams. Eleven teams were from the US and one from Canada – americans seem to have a strange understanding of what can be referred to as the “world”. In 2011, however, the Quidditch World Championship was held with 96 teams from the US, Canada and Finland in front of more than 10,000 spectators, which of course made the two founders Manshel and Benenne very proud.

Read more: Octopus Wrestling: A Strange Trend From The Past

In 2012, the first Quidditch Summer Games were held in Oxford, England, with national teams from Australia, Great Britain, Canada, the USA and France participating. Nowadays, the Muggle Quidditch World Championship only takes place every two years, and so far the US team has won the title every single time. Of course, muggle quidditch doesn’t command the same viewer numbers or media attention as soccer or other established sports, but the cult sport from the Harry Potter universe is nevertheless enjoying increasing popularity. There are now more than 18 national federations, for example in India, New Zealand, Germany, Russia, Australia, France, Canada and the USA. Only Africa is currently resisting the quidditch trend. But thanks to countries like Uganda and South Africa, where the first teams have already been founded, this may change soon.