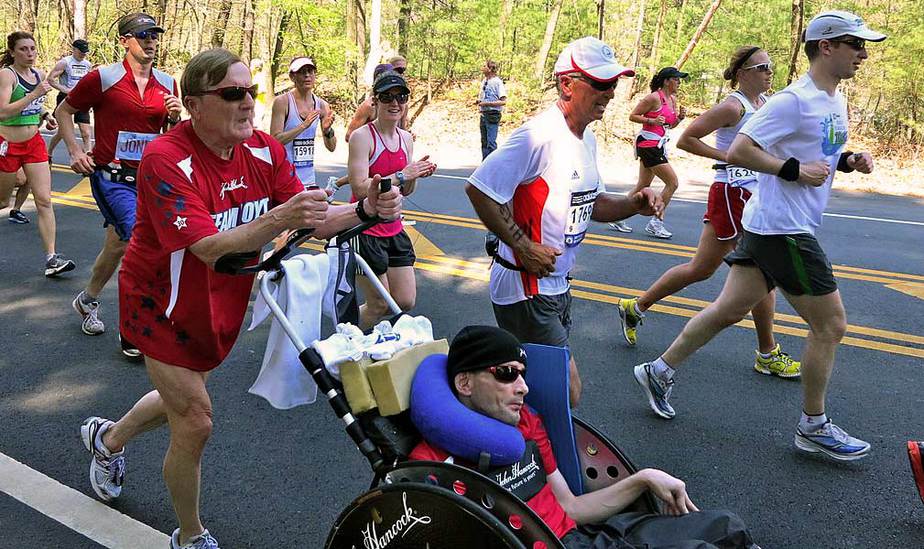 Rick Hoyt was born on 10 January 1962 in Holland, Massachusetts. But during birth, something went wrong. The umbilical cord was wrapped around his neck so that his brain was not supplied with enough oxygen. As a result, he suffered from infantile cerebral palsy – damage to the brain that disrupts the nervous system and muscles. He can only move his knees and head.

The doctors advised the family to take him to a special facility, as he would probably not be able to do more than vegetate. But his parents Dick and Judy noticed that Rick’s eyes always followed them through the room. A glimmer of hope! Maybe one day he would at least be able to communicate with them? In the years that followed, they regularly took him to a children’s hospital in Boston, where they were encouraged to treat Rick like a normal boy, which they did.

Judy taught him the alphabet and attached Post-its to objects throughout the house to teach him whole words. At the age of eleven, he was able to speak with the help of a computer. With his head, he moves a joystick with which he selects letters from the alphabet to create words. Thanks to the communication aid, it turned out that he was very intelligent, so that he was actually able to go to school (almost) normally. Unbelievable, considering the doctors’ initial prognosis. In 1993, he even received a degree from Boston University.

The Start of Team Hoyt

When Rick was 15, a lacrosse player from his school was paralyzed by an accident, and he asked his father to join him in a fundraiser run for his classmate. Rick wanted to show him that life goes on with a disability, and so they ran the five-mile race together: Rick in a wheelchair and Dick as the driving force behind it. Although it must have been an unbelievable effort for the untrained 40-year-old, they were not the last to cross the finish line.

Afterwards, the vivacious boy told his father how much the run had meant to him and that it made him feel as if he were no longer handicapped. Dick, on the other hand, felt quite handicapped by the pain he suffered after the run. But from that day on, Dick went running every day. But not just like that. He ran pushing a wheelchair with a cement bag in front of him, as Rick was off at school every day. His fitness increased enormously: Even with Rick in a wheelchair in front of him, he managed to cover a distance of five kilometers in just 17 minutes. This is quite an achievement for anybody – even without the additional weight.

After the first run was such a success, Judy had an engineer in Boston develop an affordable wheelchair that was better suited to the sport. All the wheelchairs that would follow in the course of the joint sports career were based on the simple 35 dollar model.

By now, 65-year-old Dick and his son Rick, who is 21 years younger, have celebrated numerous successes as “Team Hoyt”. They have run 72 marathons, 32 of them in Boston alone. Their personal best for a marathon was a phenomenal two hours and forty minutes. They also competed in half marathons and many other races. But if you were to think that they can only run, you would be mistaken.

Rick had the idea and the wish for the two of them to take part in a triathlon. After thinking about it for a long time, Dick found the solution for the two additional disciplines: For swimming, he used a rope to pull Rick behind him in a boat, and for the bicycle part Dick had to have a special tandem developed, in which Rick took the front position – but of course was not able to pedal along.

This way, they actually managed to complete a triathlon. Only one? No! Over the course of their career, Team Hoyt has participated in 257 triathlons – including six Ironman competitions! For an Ironman, Dick first swims 3.7 kilometers, pulling his son in a boat behind him, then rides a bicycle with him for 180 kilometers and finally pushes him in a wheelchair for another 42 kilometers. An incredible accomplishment that deserves the greatest respect.