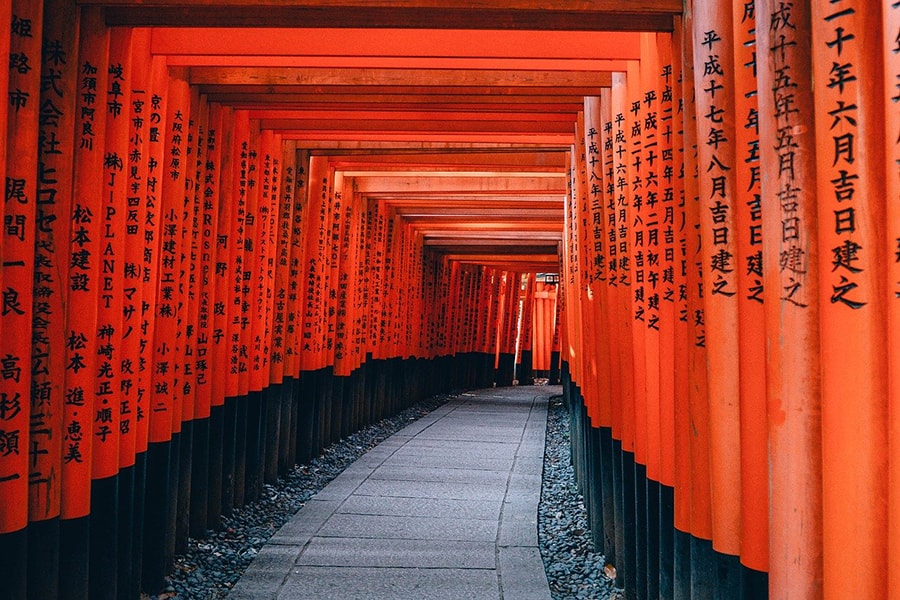 Japan is an amazing country and not comparable to any other country in the world. Its capital Tokyo is known for its neon skyscrapers and pop culture whereas in contrast, Kyoto offers Buddhist temples, Shinto shrines, and cherry blossoms. I though it is therefore worth creating a list full of fun facts about Japan so enjoy the reading.

1. In Japan, KFC is a typical feast of Christmas Eve.

2. The Japanese giant crab is the largest living crab and can reach a span of up to 12.1 feet. However, the body has an average diameter of only 14.6 inches. Do you like fun facts like this? Make sure to read our article with over 200 facts only about animals!

4. In Japan, people do not have signatures, they use stamps called “Hanko”, and every individual in Japan has one used in lieu of signatures in personal documents.

5. In Japan it is considered inappropriate to blow your nose in public.

6. Norway introduced salmon sushi to the Japanese in the ’80s. Before that Japanese were usually using sashimi and tuna for sushi.

7. In 90 percent of all adoption cases in Japan, adoption occurs among people who are already of age. The main reason is that older businessmen in particular need a successor for their family business.

8. Japanese people believe that black cats bring good luck. Do you love cats? We have a fantastic article full of facts about your favourite pet!

9. Although Japan has only one third of the population of the United States, more than six times as many Japanese people are more than 100 years old.

10. Based on crime statistics, Tokyo is the safest city in the world.

11. In Japan, people believe that one’s blood type affects one’s personality. For this reason, the Japanese version of Facebook has a drop-down menu for one’s blood type.

12. The average delay of Japanese trains is just 24 seconds.

13. Okinawa Island in Japan is the healthiest place in the world. More than 450 people, who are more than 100 years old, live there.

14. Kit Kat is very popular in Japan. The Japanese expression “Kitto Katsu” loosely translates as “safe profit”, which has led to Japanese people often giving away a Kit Kat to wish someone luck.

15. In Japan, there is a road system where music is played when a car drives at the right speed.

16. Japanese death row inmates are not told their date of execution. They have to wake up each day wondering if it might be their last.

17. In order to protect Tokyo from being flooded by typhoons, a gigantic underground system of tunnels and water pumps was developed underneath the city. It can pump 220 tons of water into the underground per second.

18. Masabumi Hosono was the only Japanese passenger on the Titanic. Fortunately, he was rescued when the ship sank, but when he returned home he was portrayed as a coward by the media and other public authorities. He was accused of being a disgrace to the country for not sacrificing his life to save the lives of others. If you want to learn more about that story you should read the article we wrote about it.

19. In Japan, there is an office tower in which a highway runs though, between the fifth and the seventh floors.

20. In Japan, a woman was sentenced to death in 2017 for killing her three husbands with poison between 2007 and 2012. Previously, she had searched dating portals for wealthy men in order to marry them and then acquire their assets through violent death. She managed to make about 7.7 million euros with this strategy. She therefore became known as the “Black Widow”.

21. In Japan, if you commit suicide by jumping in front of a train, rail companies charge your family a disruption fee.

22. After blue street lighting was introduced in some areas of Japan, the suicide and crime rate dropped dramatically.

23. Death from being overworked and work-related stress are such a common cause of death in Japan that the Japanese even have their own word for it: Karōshi.

24. According to a survey conducted in 2000, Japanese people think that instant noodles are the greatest Japanese invention of the 20th century.

26. An interesting new pattern of behavior was observed in Japanese crows. Nuts, which the animals are not able to crack on their own, are increasingly thrown onto roads by the crows so that cars drive over them and crack them. Afterwards, the crow flies back to the open nut and collects the contents.

27. The world record for the most consecutive push-ups was set in 1980 by Minoru Yoshida from Japan who managed to do 10,507 in a row.

28. During WW2, Hajimi Fuji volunteered for the kamikaze but was refused because he had a wife and two children. His wife then drowned her two young girls and herself.

29. Most streets in Japan have no name.

30. “Hikikomori” is the term used in Japan to describe people who withdraw completely from social life and do not wish to have contact with other people.

31. Late-night dancing was illegal in Japan until 2015 due to a ban that was put into place after World War Two.

33. The Japanese company YKK is the largest manufacturer of zippers in the world. That is why the company logo “YKK” can be found on most zippers worldwide.

34. Japan has more registered pets than it has children.

35. Onoda Hirō was a Japanese intelligence officer who believed that the proclamation of the end of World War II was only a ruse by the Allies and therefore continued to hold his position 29 years after the end of the war. Only when his former superior, who was now a bookseller, visited him in 1974 could Onoda be convinced that the war was over.

37. The word “Tsundoku” is Japanese and describes people who buy many books but never read them.

38. The earthquake that struck Japan in 2011 with a magnitude of 9.0 was so strong that it changed the earth’s mass. Since then, one day on earth has been 1.8 microseconds shorter.

39. In Japan, it is socially acceptable to sleep while working. It is perceived as a sign of hard work.

40. The “Aokigahara forest” in Japan is also known as the “Suicide forest” as it is the most popular site for suicide in Japan. Just in In 2010, the police recorded more than 200 people having attempted suicide in the forest, of whom 54 completed the act.

41. The suicide rate in Japan is 60 percent above the global average. This is why workshops teaching people to express their feelings are becoming more and more popular in the country.

Read More: 68 Fun Facts about Europe You Need to Know

42. The word Jedi from Star Wars comes from the Japanese word “Jidai-geki”, which is a Japanese term for samurai movies.

43. McDonald’s largest market outside the U.S is Japan, with almost 3,000 restaurants.

44. “Pikachurin” is a protein that facilitates the correct transmission of electrical signals between the eye and the brain. It was discovered by Japanese scientists and named after the Pokémon Pikachu.

45. In Japan, more paper is used for manga than for toilet paper.

46. There is a real superhero in Tokyo. He calls himself Mangetsu Man and wears a purple bodysuit as well as a large yellow mask. He has made it his mission to rid the city of garbage and keep it clean.

48. The video game “Super Mario Bros.” was so popular in 1985 that the best-selling book in Japan was a guidebook containing tips on how best to play the game.

49. Japanese shops have small balls filled with orange die in their tills. In the event of a theft, the store staff can throw the balls at the robber, who is then marked with the orange color for the police.

51. Due to earthquakes and tsunamis, Tokyo was destroyed and rebuilt on average every five years between 1608 and 1945.

52. Since the end of the Second World War, Japan has apologized in official statements more than 50 times for its acts during the war.

53. In Japan, a restaurant called “The Restaurant Of Order Mistakes” was opened. The restaurant’s waiters all suffer from dementia, so visitors never know if they will really get what they ordered.

I hope you enjoyed these fun facts about Japan as much as I did and that it has inspired you to visit this unique country someday! If you like that article be sure to also visit one of our other fact articles. We have plenty more of them which you can all find either in our general Facts section or in our section dedicated for facts about every country. Or just follow us on Facebook, Instagram, Twitter or Pinterest for new facts each day.

Apart from the above listed fun facts about Japan you might also be interested in some more general facts about that country. See them here: