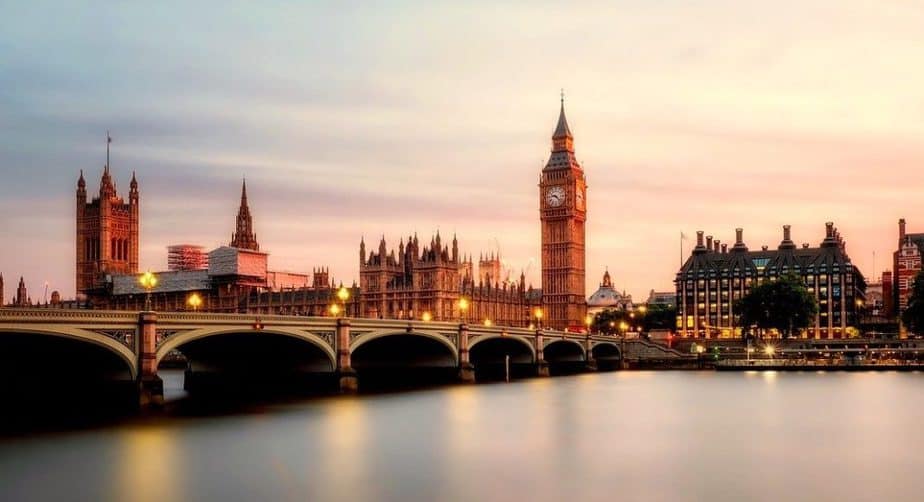 London Calling! This phrase was used by the British BBC during World War II when opening their broadcasts outside of England but today it’s not BBC to tell you something. It’s us to tell you our new and unbelievable fun facts about London itself. Do you know that London is still paying rent to the Queen on a property leased in 1211 and that more than a half of the London Underground is actually above the ground? Seems a bit crazy yet it’s true. We found 35 of these amazing facts about the capital of London so enjoy.

1. When the Millennium Bridge in London was completed in the year 2000, pedestrians almost caused it to collapse. Due to a slight natural oscillation of the bridge, the people crossed it in lockstep so that a resonance occurred. The bridge started swinging so strongly that it had to be closed only two days after its opening in order to make appropriate improvements.

2. Big Ben is only the name of the main bell in the belfry of London. The correct name of the bell tower is “Clock Tower”.

3. Although during the Great Fire of London the homes of 70,000 of the city’s 80,000 inhabitants were destroyed only six verified deaths were officially recorded.

4. The London Underground now makes more profit by selling its popular underground maps than it does operating the subway.

8. During World War II all venomous and deadly animals in the London Zoo were killed to prevent them from escaping into the city and killing anyone, in case the zoo was bombed.

9. The official length of a marathon was defined as 26,219 miles because it was exactly the length of the course at the Olympic Games in London in 1908 and not because it corresponds to the historical distance between Athens and Marathon. That distance is only about 24.8 miles.

10. From 5 to 9 December 1952, a fog crept up over London and claimed the lives of about 12,000 people. When strong winds finally lifted the fog, people were shocked to find so many corpses. This story is really unbelievable so we wrote a detailed article about it. You can read it here.

11. Traffic in central London moves at just 10 miles per hour which is the same speed as a horse runs.

13. The British Library in London is the largest library in the world.

14. During World War II, a Canadian soldier smuggled his bear “Winnipeg” to Britain, and it later became an attraction at the London Zoo. Young Christopher Robin Milne loved this bear so much that he gave his teddy bear the same name. This in turn inspired his father to write the stories about the bear Winnie the Pooh.

15. After the great success of the Eiffel Tower, London planned the construction of the similar looking Watkin’s Tower in 1892. Due to economic difficulties encountered by the construction company, however, the tower was never completed and was later demolished. At over 1.148 feet, it would have been the tallest building of its time.

16. The Christmas tree that is set up every year on London’s Trafalgar Square is always given to the British by Norway. This tradition has existed since 1947 and is intended to express the Norwegians’ gratitude for the support by the British during the Second World War.

18. Rudolf Hess, the appointed Deputy Führer to Adolf Hitler, was the last state prisoner to be held at the Tower of London.

19. Shortly before his death, James Barrie, the creator of Peter Pan, transferred the rights to his book to the Great Ormond Street Hospital in London, which today is one of the leading children’s hospitals in Britain. To this day, the royalty income from the book continues to support the hospital in treating a large number of children.

20. Because of the large number of trees London can be recognized as forest based on UN definition.

21. London is the city with the most millionaires in the world. It is followed by New York City in second and Tokyo in third place.

22. In London the buses are red because the owner wanted to stand out from the competitors.

23. More than a half of the London Underground is actually above the ground.

24. The explosion of a modern nuclear atomic bomb in London would produce such a large pressure wave that glass panes in Berlin would also shatter.

25. Since the events of 9/11 the New York Police Department embeds intelligence officers in 13 cities overseas including London, Paris, Jerusalem, Madrid, Toronto and Sydney.

26. London is currently the only city that has hosted the Olympic games three times. Paris will follow in 2024 and Los Angeles in 2028.

27. In 1251 Henry III had been given a polar bear by the king of Norway, Haakon the Young. The bear was held in the Tower of London tied to a long chain so it could swim in the Thames and catch fish.

28. The first traffic light was installed in London outside the Houses of Parliament in 1868. Unfortunately, it exploded very soon, killing a policeman.

29. During the 18th century, you could pay your admission ticket to the London Zoo by bringing a cat or a dog to feed the lions.

32. In the past London has been called Londinium, Lundenwic and Lundenburg.

33. During World War II London became the capital city of 8 countries at the same time. It was a safe haven for the governments-in-exile of Poland, Norway, the Netherlands, Belgium, Luxembourg, Czechoslovakia, Greece and Yugoslavia.

35. When the first V2 rocket hit London during World War II Wernher Von Braun, the man credited with designing the rocket for the Germans, said that “the rocket worked perfectly, except for landing on the wrong planet”.

Apart from be above listed fun facts about London you might also be interested in some more general facts about that city. See them here:

30 Facts About The Atomic Bombing of Hiroshima and Nagasaki

The Second World War was one of the darkest chapters of humanity. The main players acted incredibly aggressively and unleashed tremendous forces to bring...
Read more
Facts

Hardly anyone is not familiar with the brilliant movie "Schindler's List" by Steven Spielberg, which tells the story of the German industrialist Oskar Schindler....
Read more