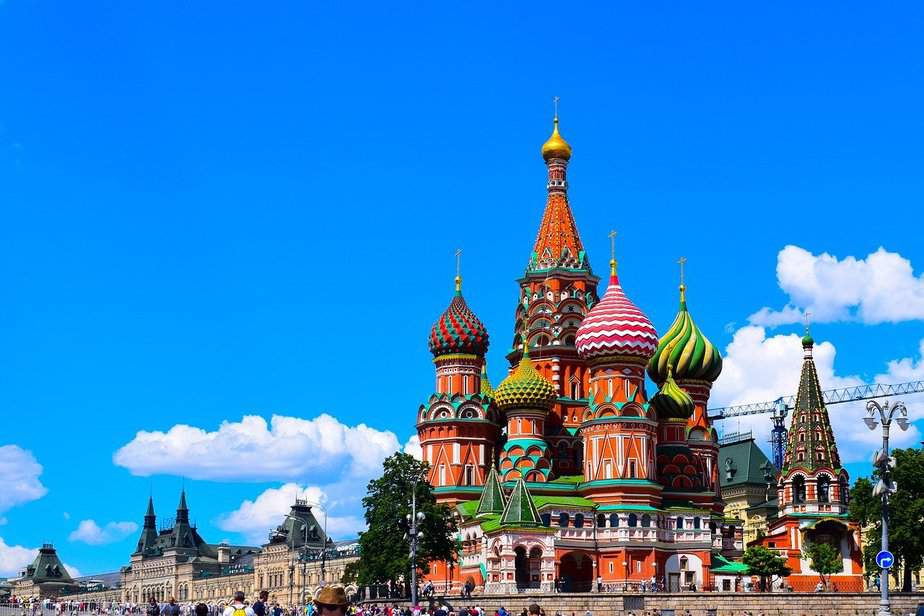 Russia is not just the biggest country in the world but also has a lot of other interesting fun facts to offer. We searched for the most amazing trivial information and facts about Russia and found the following. Enjoy them and let us know how much of these facts you already knew.

1. Domestic violence against women is not recognized as a crime by Russian law.

3. In terms of land mass, Russia is the largest country in the world.

4. Vladimir Putin once tried to exploit Angela Merkel’s fear of dogs. The two heads of state met in Sochi in January 2007 to discuss important issues related to energy policy and cooperation between Russia and the EU. During the entire conversation, Putin let his Labrador “Koni” stay close to Merkel’s legs.

5. In 1986, a Russian pilot bet his co-pilot that he could land an airplane without sight, using only the onboard instruments. To prove this, the two of them completely covered the windows of the plane and because of this negligence, the plane crashed. Of the 94 passengers, 70 died, but the pilot himself survived the accident.

6. When her husband died in the war in 1941, Ukrainian Marina Oktyabrskaya sold all her belongings and donated the money to the military to buy a tank. She was able to convince the military command to drive the tank herself and turned out to be an excellent tank driver. After she died in battle in 1944, she was posthumously awarded the title “Hero of the Soviet Union”.

7. In Kazan, Russia, there is a “Temple of all Religions”. The building contains architectural elements of a variety of religions and was therefore created for people of all faiths.

9. There are 11 million more women than men living in Russia.

10. Beer and all other alcoholic drinks with less than 10% alcohol in were not considered an alcoholic beverage in Russia until 2013.

11. The Soviet Union had its own top-level domain. Until the collapse of the nation, there was a time window of 15 months during which it was possible to register domains with the ending “.su”.

15. During World War I the Emperor of Germany, the King of Great Britain and the Emperor of Russia were all first cousins. The German Emperor Wilhelm II therefore commented sarcastically on the First World War: “If our grandmother (Queen Victoria) were still alive, she would never have allowed it.”

16. The Russian word “Vodka” derives from the word “Voda”, which means “water”.

17. Postnik Yakovlev is best known as the builder of the St Basil’s Cathedral in Moscow. Legend has it that Ivan the Terrible blinded him after he has finished that building, so he could never build anything to rival it.

19. Studies have shown that around 50 per cent of all policemen in Russia take bribes.

20. Hitler planned to celebrate his victory over Russia in the Hotel Astoria in Saint Petersburg.

21. Josef Stalin ordered at least 22 assassination attempts on the former Yugoslav President Josip Broz Tito. After his death, a letter to Stalin with the following words was discovered: “Stop sending people to kill me. If you don’t stop sending assassins, I will send one to Moscow and I will certainly not have to send a second one.”

22. The world’s longest escalator is 453 feet long and located in St. Petersburg, Russia.

23. Russian scientist Anatoli Bugorski accidentally held his head into a running particle accelerator in 1978 during an inspection. The doctors assumed that he would die a few days later, but surprisingly, he survived. Only one half of his face was paralyzed, his left ear is deaf, and he regularly suffers epilepsy attacks.

24. During the siege of Leningrad by the German troops the local radio station was continuously playing a steady ticking of a metronome as a sign that the city was still alive.

25. With 9.200 kilometre (5.700 mile) the Trans-Siberian Railway is the single longest railway in the world. It spans almost all the way across the county of Russia. The entire journey non-stop takes 152 hours and 27 minutes to complete. It even crosses 8 time zones.

26. In the late 80s Pepsi sold its soda to Russia and received in return 17 submarines, a cruiser, a frigate, and a destroyer as they were not accepting the Russian currency.

28. With 700 seats Russia is home to the largest McDonald’s restaurant in the world. If you are looking for more facts about McDonald’s make sure to check this article from us here.

29. Lake Baikal in Russia is home to 20 percent of the world’s total unfrozen fresh water.

30. In 2013 a Bill was signed in Russia against „homosexual propaganda“ making it illegal to tell children that homosexuality is not evil but normal.

32. The Hermitage, the greatest museum in Russia, is home to more than 70 cats.

33. Kizhi Pogost is a church in Russia which was built more than 300 years ago and is made exclusively from wood. It is over 115 feet high and does not contain a single nail.

34. The life expectancy for male person is just 65 and therefore lower than it is in Iraq or North Korea.

35. Lake Karachay in Russia has been overrun with so much nuclear waste after World War II, that one hour of exposure is a lethal dose of radiation.

36. Moscow has more billionaires per capita than any other city in the world.

37. The name “Red Square” has nothing to do with communism nor with the colour red. It derives from the Russian word “krasnyi” which means “beautiful”.

38. Russians consider it as wimpy to lower the ear flaps on your Ushanka (fur hat) unless the temperature gets below -20C.

39. The Russian Fyodor Vasilyev holds the record for most children fathered by a man with a woman. In the 18th century, his wife gave birth to a total of 69 children, including four sets of quadruplets, seven sets of triplets and 16 pairs of twins. Later on, he married again and fathered another 18 children with his second wife, including two sets of triplets and six pairs of twins.

40. Based on an online survey Moscow has the world’s most beautiful underground.

41. The Diomedes Islands are a group of islands in the Arctic Ocean. The western island of this group belongs to Russia, while the eastern island belongs to the USA. Both islands are only 2.5 miles apart, but as the International Date Line runs between them, they are separated by a 21-hour time difference.

43. During the Cold War, the Soviet Union launched the “Intervision Song Contest”, the Soviet equivalent of the Eurovision Song Contest. However, since not every viewer had a telephone to vote on, the audience instead had to turn on the lights in their houses, if they liked the song, and turn them off, if they didn’t. The local power station then used the electricity consumption to determine how many people had voted for a song.

44. Russian man, Valery Spiridonov was alleged to be the first human to receive a head transplant. His head was to be transplanted to a new body, but he decided against it after a long hesitation. Meanwhile, a Chinese man that hasn’t been named is to take his place.

45. There’s only one country between Finland and North Korea: Russia.

46. During the 17th century, Peter the Great instituted a tax on facial hair in an attempt to modernize Russian society and to finance the increasing expenses of the king.

48. Russians drink about 18 litres (5 gallons) of alcohol per year, which is twice the recommended limit.

Apart from be above listed fun facts about Russia you might also be interested in some more general facts about that country. See them here:

Russia was founded in 862 by King Rurik of the Rus. He was made the ruler of Novgorod and after some years the Rus conquered the city of Kiev and started the so called “kingdom of the Kievan Rus”.

What is Russia known for?

Russia is known for a lot of thing but probably most famous for Vodka. Did you know that the Russian word for “Vodka” derives from the word “Voda”, which actually means “water”.