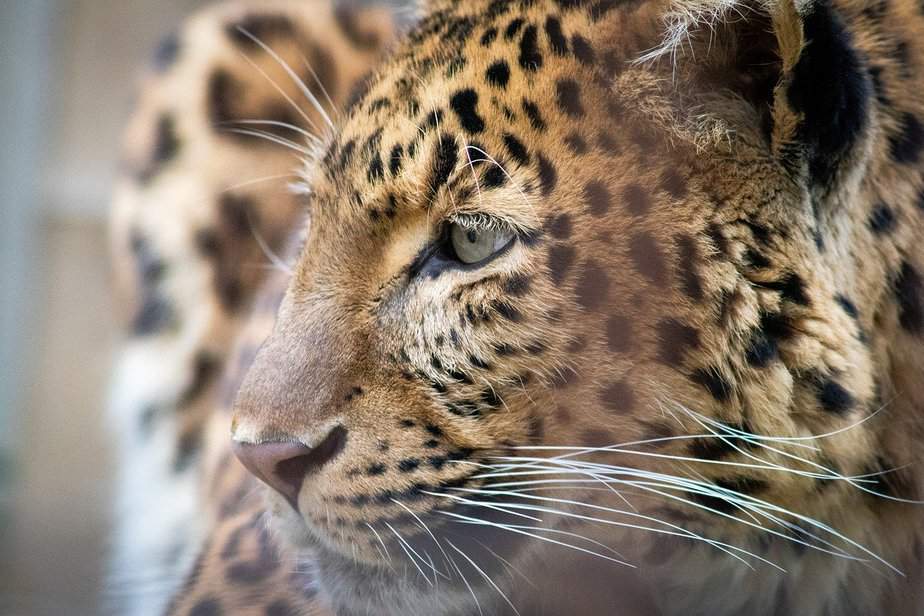 Whenever people are visiting Africa they are searching for the so called Big Five. The term was coined by big-game hunters, and refers to the five most difficult animals in Africa to hunt on foot. Nowadays people use that term for the same animals but not to hunt and kill them but just to see them during a safari. The Big Five animals are the leopard, lion, elephant, rhinoceros and cape buffalos. All of these animals are amazing, so we decided to create a list of facts only about the Big Five. If you like that article, make sure to share it with your friends and if you are hungry for more fun facts, we also have many other facts list.

1. Due to the decline of the lion population, there are now more lion statues worldwide than real lions.

2. The lion population in Africa has been reduced by half since the early 1950s with fewer that 20,000 remaining in all of Africa today.

3. The South African rock hyrax is only 20 inches tall, weighs about 8.8 pounds and looks like a big guinea pig. Nevertheless, its closest relative is the elephant.

5. A single cape buffalo can kill a lion.

6. There are five different species of rhinoceroses: White, Black, Indian, Javan, and Sumatran rhinos. Three of these species are currently critical endangered.

7. Female elephants older than 60 years are still able to give birth.

8. Rhino horns are made of keratin, which is also the key substance of human fingernails and hair.

9. During the expansion of the railway network in Uganda, an incredible incident occurred. Two Tsavo lions repeatedly killed workers during night and slowed the construction progress. About 135 people died this way.

10. The word “elephant” is the Latinized form of  the Greek word “elephas” which means “ivory”.

12. While swimming elephants use their trunks as snorkels.

13. Although often shown in cartoons elephants do not really like peanuts. They don’t eat them in the wild, nor are peanuts a typical diet for captive elephants.

14. The horns of the cape buffalo are an excellent indication of age and gender. Female and young male buffalos do not have the hard shielding that protects the base of the skull in large adult males.

16. An elephant’s trunk has more than 40,000 muscles in it and is weighing up to 400 pounds. Nevertheless, it is so dexterous that he can pick up tiny things like a single grain of rice.

17. Elephants are able to recognize themselves in a mirror. Even most primates do not have this mental capacity.

19. In Sri Lanka, killing an elephant is punishable by death.

20. The leopard of Panar is known for having killed at least 400 humans in the Panar region. Up until now this is the highest number of killings by a single leopard.

21. Rhinos smell the droppings of other rhinos to identify a variety of characteristics about its owner like the sex and approximate age of the animal.

22. During mating season lions generally mate every 20 to 30 minutes, with up to 50 copulations per 24 hours.

23. Rhinos have very poor eyesight and it would even be difficult for them seeing someone standing just 100 feet (30 meters) away. However, they have very good olfactory (smell) and auditory (hearing) senses.

24. Female lions take over 90 percent of the hunting activities of lions.

25. It has been recorded that African buffalos are seeking revenge on someone even years after being threatened by them.

26. Buffalos are often confused with bisons, as early American settlers called bisons “buffalos” due to their similarity in appearance. However, they are separate species.

28. The lion is the second largest cat in the world. It is slightly smaller than a tiger.

29. The white rhino is the second largest land living animal after the elephant.

30. Black panthers are not an actual species. Instead, these are really leopards or jaguars that due to a genetic defect have a black coat.

31. According to current estimates, there are only two living Northern white rhinos left and both of them are female. Meaning the species is on the verge of extinction.

32. Rhinoceros is a combination of the Greek words „Rhino“ and „ceros“ which means „nose“ and „horn“.

33. Female elephants live in small groups of about 15 animals. They are all related and usually led by the oldest in the group.

34. Asian elephants can’t run. This would require lifting all four feet at once but due to their own physiology they are not able to do this.

35. Elephants only need about four hours per night for sleeping. They even spend half of their sleep standing up.

36. Due to its adapted retinas, leopards can see up to seven times better in the dark than humans.

37. There are three different species of elephants living in the world: Asian elephants, African elephants and Savannah elephants.

38. In Kenya, elephant droppings are used to make paper. 110 pounds of excrement can be used to produce 125 pages of paper. The proceeds from the sale of the paper are used to expand the elephant reserve.

39. The drug carfentanyl is considered to be 5,000 times stronger than heroin. The substance was originally used to anaesthetize elephants, but it is increasingly being used by humans as a drug.

40. It is possible for leopards, lions, tigers and jaguars to mate with each other and produce living descendants.

41. When it comes to extreme heat in Melbourne, the lions in the zoo are getting frozen blood.

42. White rhinos and black rhinos have actually the same grey color. Reason for the misleading naming is a wrong translation of the Dutch word “wijd” (English for wide) which was mistranslated by English speaking settlers in Africa as “white”. The Dutch “wijd” was referring to the size of the rhino’s mouth but not to the color of the animal.

43. A fully-grown elephant can drink about 53 gallons of water within five minutes.

44. At the beginning of the 20th century there where about 500,000 rhinos living across Africa and Asia. Today there are only 30,000 rhinos left living in the wild.

46. The closest living relatives to rhinos are not elephants or hippos but odd-toed ungulates liker horses, tapirs or zebras.

47. The rosettes on a leopard’s fur are circular in East African leopard populations and tend to be squarish in Southern African.

48. Like a hug or a handshake, elephants intertwine their trunks when meeting as a show of acceptance and affection.

49. The darker the mane of a lion, the older the animal is.

51. A single porcupine can fight off a pride of lions.

52. A liger is a cross between a lion and a tiger. They are the largest cats of prey in the world and can weigh up to 990 pounds.

53. The biggest lion ever recorded weighed 827 pounds (375 kilograms). This lion was almost ten feet (three meters) long in length and it was witnessed in captivity at Ireland’s Dublin Zoo in 1959.

54. Scientist have discovered that leopards like the smell of “Obsession for Men” by Calvin Klein. The fragrance is therefore now often used to lure leopards to cameras in the wild.

55. The word for lion in Swahili, an African language, is “Simba” which is the same term that was used as name for the main character in “The Lion King”.

56. A lion’s roar can be heard from as far as five miles (eight kilometers) away.

57. The word “leopard” derives from the Greek word “leopardus”, which is a combination of leon (lion) and pardus (panther).

59. During the 18th century, you could pay your admission ticket to the London Zoo by bringing a cat or a dog to feed the lions.

61. When running, rhinos can reach speeds of up to 30 miles per hour (50 kilometers per hour). They are therefore the fastest running mammal weighing over 2,200 pounds (1,000 kilograms).

62. Rhinos and oxpeckers – a small bird – have a symbiotic relationship. The oxpecker stands on the rhino’s back and keeps the rhino skin clean by eating small insects and if the oxpecker senses danger it will create commotion to make the rhino aware.

63. An elephant calf is almost blind after birth however it can recognize its mother by touch, scent, and sound. It needs to stay very close to its mother for the first couple of months.

64. The lion from film studio Metro-Goldwyn-Mayer is called “Leo the Lion”.

66. Elephants are afraid of bees. Some farmers even have been seen to utilize beehives to deter elephants from coming onto their land.

67. Lions are known as “the king of the jungle” however they do not live in jungles at all. They live only in grasslands and plains.

68. A male lion needs 15 pounds (seven kilograms) of meat a day whereas a female lion only needs 11 pounds (five kilograms) per day.

69. Just like whales, elephants and hippos can communicate with their fellow creatures over long distances via infrasound.

70. Female elephants undergo the longest pregnancy of all land mammals. They are pregnant for 22 months.

71. Male Indian rhinos can spray urine over a distance of 16 feet (five meters). They do so to show dominance and marking its territory.

What do you think about our Big Five animal facts? What was your favorite fact and do you know even more? Write us a message and let us know. If you want even more facts like this just visit our section facts for our best facts lists and all the stories behind the facts. We also published some books with our most amazing fun facts so have a look if you are interested. You can of course also follow us on Instagram, Pinterest, Twitter or Facebook for new facts and trivia every day. We are looking forward to meeting you there. We also want to highlight that we are now on YouTube with our own channel full of videos about our best stories and facts. Make sure to subscribe and never miss a video.