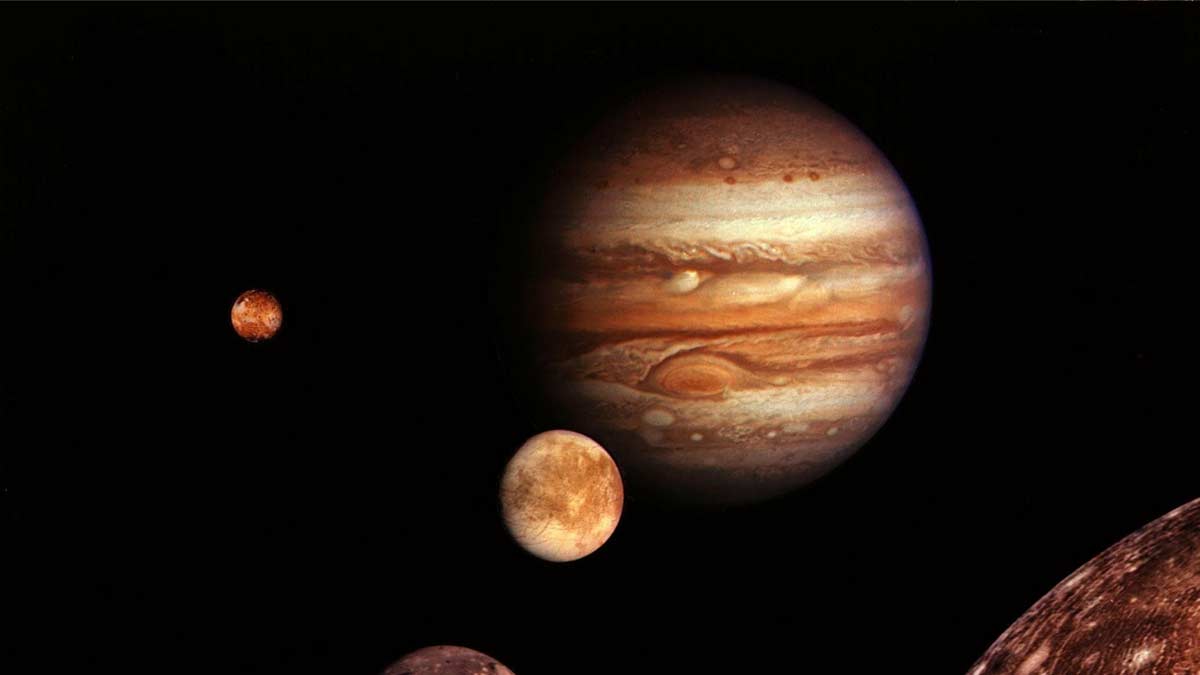 The solar system has much more to offer than just the search for life. Yet there are a few places where life is theoretically possible. For example, on Jupiter’s moon Europa. But this is only one of the incredible facts about Jupiter that we have collected for you. Jupiter is definitely a planet of superlatives so be curious!

1. With 82 moons, Saturn has the most moons in our solar system. Jupiter is second with 79 moons.

2. Jupiter’s moon Ganymede is the largest object in our solar system that has no substantial atmosphere.

3. On Jupiter the days are shorter than on any other planet in our solar system. For a rotation around its own axis, the giant needs only ten hours.

4. In the core of Jupiter, it is hotter than on the solar surface.

5. The gravitational pull of Jupiter is so strong that a rocket would have to travel 135,000 miles per hour (215,000 kilometers per hour) to leave the planet.

6. Jupiter’s moon Ganymede is the largest moon in the solar system. With a diameter of 3,273 miles (5,268 kilometers) it is even larger than the planet Mercury.

7. So far there have been eight space probes that have examined Jupiter.

8. Jupiter is the largest planet in our solar system. It is 11 times as big as Earth.

9. On Jupiter and Saturn it rains diamonds.

10. The “Great Red Spot” on Jupiter is a large high-pressure area twice the size of the Earth. It is the largest hurricane in the solar system and is believed to have existed for over 400 years.

11. It is not known where the “Great Red Spot” on Jupiter gets its red color from.

12. While Saturn has long been known for its rings, the ring systems around the gas planets Jupiter, Uranus, and Neptune were first discovered in the 1970s. Would you like to learn more facts about Saturn? Then take a look at our article.

13. Jupiter has the largest magnetic field in our solar system and therefore even surpasses that of the sun. One of the reasons for this is the high rotational speed of the planet.

14. Jupiter is named after the Roman king of the gods.

15. Uranus was the first planet discovered with the aid of a telescope as Mercury, Mars, Venus, Saturn, and Jupiter were all bright enough to be easily visible to the naked eye.

16. On Jupiter’s moon Europa, there is probably an ocean under a thick layer of ice that holds more water than the oceans of the Earth combined. Scientists believe it may even contain microbes.

18. Since Jupiter consists mostly of hydrogen and helium, the planet is sometimes called a fallen star, since these are the basic requirements for stellar fusion. But in fact, despite its size, it is not massive enough to start fusion processes in its interior. This would require about 70 times its mass.

Which of our facts about Jupiter did you find most exciting? Hard to say, isn’t it? Jupiter is simply an incredibly exciting planet, there is a lot to know about, and you have now learned a little more about it. You want more? Then follow us on Pinterest, Twitter, Facebook or Instagram to get your daily dose of facts. And of course, you can also subscribe to our newsletter or enjoy our YouTube videos.