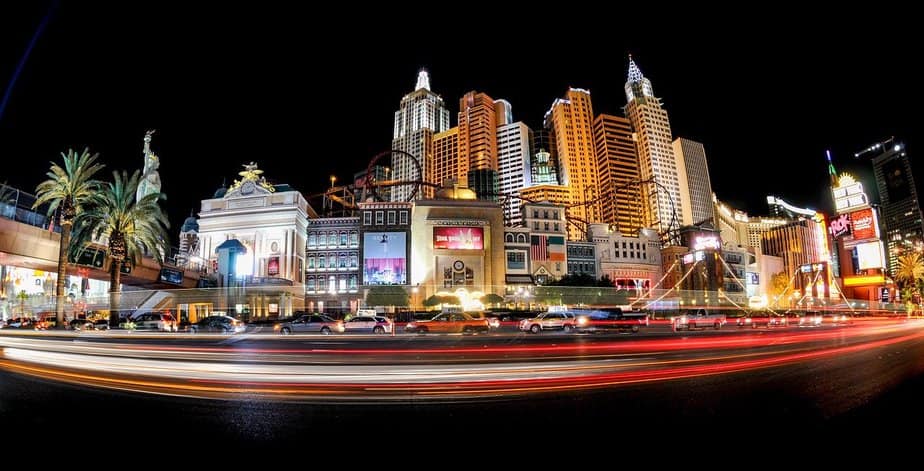 Las Vegas is an impressive city where the superlative is at home. It’s no wonder that over 42 million visitors are drawn every year by the glittering lights that turn night into day. Glamorous suites, thousands of miles of fluorescent tubes, beautiful women and luxurious casinos on all sorts of topics are waiting for the adventurers who want to spend a few breathtaking days in Sin City. And because there is so much to discover, we have selected 40 impressive facts about Las Vegas for you.

1. After Nevada legalized the sale of marijuana, a drive-in for joints opened in Las Vegas.

2. With 7,128 rooms, the Venetian in Las Vegas is the second largest hotel in the world. Only the First World Hotel in Malaysia is even larger with 7,351 rooms.

3. The second hotel casino in Las Vegas was already been financed with mafia funds. It was called Flamingo and was named after the builder’s partner. She was a stripper and was nicknamed “Flamingo” because of her long, thin legs.

4. Seen from space, Las Vegas is the brightest place on earth.

6. In the 1950s, Las Vegas visitors were still able to observe atomic bomb tests in the desert.

8. Las Vegas is the most visited city in the United States.

9. In 2018, there were already 104 licensed hotel casinos in Las Vegas – more than in any other city in the world. The Chinese gambling capital Macau had 40 casinos of this type in the same year.

10. Although prostitution is not prohibited in Nevada, it is illegal in Las Vegas.

11. There are hardly any clocks in Las Vegas casinos so that guests forget the time while playing.

12. In Las Vegas, Paris and Munich, there are escape games based on the horror movie “SAW”.

13. At 27 feet (8.23 meters), the chocolate fountain in the Bellagio in Las Vegas is the largest fountain of its kind and even received an entry in the Guinness Book of World Records. Looking for more records like this? We have a fantastic article about the most impressive records ever.

15. A 25-year-old software programmer from Los Angeles hit the biggest jackpot ever in Las Vegas. At the Excalibur hotel, he won around 39.7 million Dollars in 2003 with a 100 Dollars stake.

16. In 1980 a hospital in Las Vegas had to dismiss several employees as they were betting on when patients would die.

17. Most of the water in Las Vegas comes from Lake Mead. Due to water wastage in Las Vegas, the water level has dropped by 98 feet (30 meters) over the past 20 years. Since then, the city has been using water cops against water wasters.

18. The golden look of the windows of the Mirage hotel in Las Vegas was created using real gold dust.

Read more: 51 Facts About China – The Only List You Need To Know

21. In the famous Heart Attack Grill in Las Vegas, which sells burgers like the Triple Bypass Burger, a customer actually had a heart attack after eating in the restaurant.

22. “Dig this Las Vegas” is a playground for adults, where bulldozers, excavators and other heavy equipment can be driven and used to dig.

23. Las Vegas was not founded as a casino city in the middle of the Nevada desert. Indeed, due to its abundant water resources, it developed from a stop on trade routes to a railway junction during the first hundred years after its discovery in 1829. In 1941, the first hotel-casino opened as an attraction for the travelers and the settled workers. From then on, Las Vegas developed over the next hundred years from the railway junction to the most visited casino city in the world.

25. Eight of the ten largest hotels in the world are located in Las Vegas.

26. Ben Affleck was banned for life from playing at Hard Rock Casino in Las Vegas after security caught him counting cards while playing Blackjack.

27. The Italian state of Bellagio, namesake of the Las Vegas hotel with the same name, has fewer inhabitants than the hotel has rooms. See here even more facts about Italy.

29. Las Vegas power consumption is twice as high at night as during the day.

30. Around 80 percent of Las Vegas visitors come from the United States.

31. Due to the popular shrimp cocktails, more shrimps are consumed in Las Vegas every year than in the rest of the USA.

32. FedEx was deep in the red shortly after it was founded due to the oil crisis. As a result, founder Frederick Smith took the last 5,000 Dollars from the company’s box office, earning 27,000 Dollars in Las Vegas. Inspired by the profit, he managed to save his company.

34. Las Vegas is Spanish and means “The Meadows” because at the time of the discovery it was a green oasis in the middle of the Mojave Desert.

37. In 1966, multi-billionaire Howard Hughes and his entourage lived on two floors of the Desert Inn in Las Vegas. When asked to move out to make room for wealthy players, he bought the hotel for 13.3 million dollars.

38. On average, more than 300 couples get married in Las Vegas every day.

39. The Kingpin Suite at the Palms Resort in Las Vegas has two complete bowling alleys, while the Hardwood Suite offers half a basketball court.

40. Even at Las Vegas Airport there is a room with slot machines.

Hopefully, you liked our 40 facts about las vegas. If you want to read more like this you should also visit one of our other fact articles. We have plenty more of them which you can all find in our general Facts section. Or just follow us on Facebook, Instagram, Twitter or Pinterest for new facts each day.

Apart from be above listed fun facts about Las Vegas you might also be interested in some more general facts about that city. See them here: