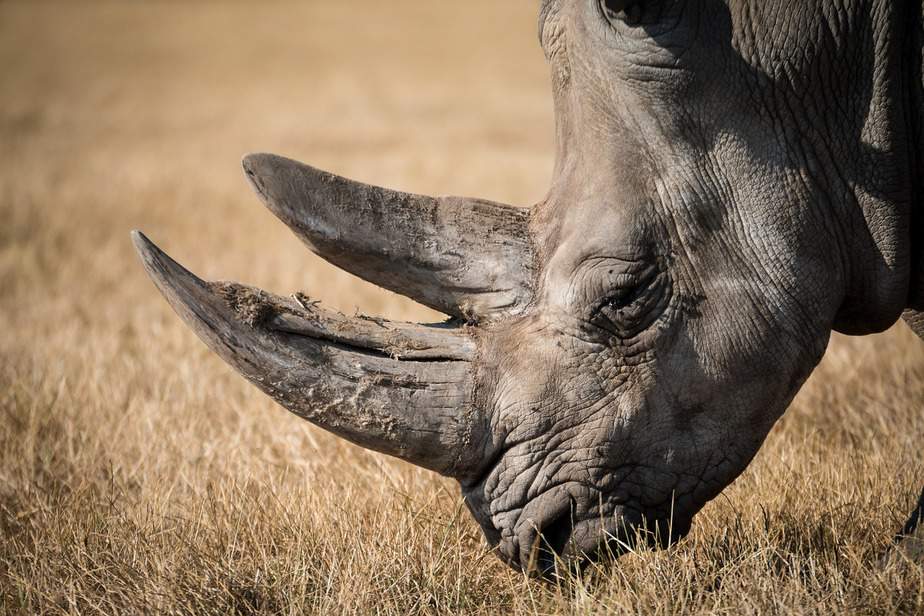 Rhinos are one of the most endangered animals on the planet, so we have to write an article about these amazing creatures to make people aware that something needs to be changed. Our planet is so beautiful that we have to take care of it and we want to contribute by telling you the most amazing facts about rhinos we know. If you like that article or rhinos in general, make sure to share it with your friends and family. We also published some book with our best fun facts so make sure to check them out if you are a facts junky as we are. And there is also our YouTube channel you can subscribe to.

1. When running rhinos can reach speeds of up to 30 miles per hour (50 kilometers per hour). They are therefore the fastest running mammal weighing over 2,200 pounds (1,000 kilogram).

2. Rhino horns are made of keratin, which is also the key substance of human fingernails and hair.

3. White rhinos and black rhinos have actually the same grey color. Reason for the misleading naming is a wrong translation of the Dutch word “wijd” (English for wide) which was mistranslated by English speaking settlers in Africa as “white”. The Dutch “wijd” was referring to the size of the rhino’s mouth but not to the color of the animal.

4. According to current estimates, there are only two living Northern white rhinos left and both of them are female. Meaning the species is on the verge of extinction.

5. Rhinos and oxpeckers – a small bird – have a symbiotic relationship. The oxpecker stands on the rhino’s back and keeps the rhino skin clean by eating small insects and if the oxpecker senses danger it will create commotion to make the rhino aware.

6. The closest living relatives to rhinos are not elephants or hippos but odd-toed ungulates like horses, tapirs or zebras.

8. Rhinos smell the droppings of other rhinos to identify a variety of characteristics about its owner like the sex and approximate age of the animal.

9. Rhinoceros is a combination of the Greek words „Rhino“ and „ceros“ which means „nose“ and „horn“.

10. At the beginning of the 20th century there where about 500,000 rhinos living across Africa and Asia. Today there are only 30,000 rhinos left living in the wild.

11. Male Indian rhinos can spray urine over a distance of 16 feet (5 meters). They do so to show dominance and marking its territory.

12. There are five different species of rhinoceroses: White, Black, Indian, Javan, and Sumatran rhinos. Three of these species are currently critical endangered.

13. The white rhino is the second largest land living animal after the elephant.

14. Rhinos have very poor eyesight and it would even be difficult for them seeing someone standing just 100 feet (30 meters) away. However, they have very good olfactory (smell) and auditory (hearing) senses.

Rhinos are really amazing animals and we have to do our best to protect them. We hope you liked our facts about rhinos as much as we do but please let us know if you are aware of any additional fun facts we should add to this list. If you want to learn even more facts about animals you should also check out the list we created about that topic. We also have many other lists like our best fun facts, the most interesting facts, amazing facts, strange facts or just random facts. Make sure to check them out as well. You can of course also follow us on Instagram, Pinterest, Twitter or Facebook.