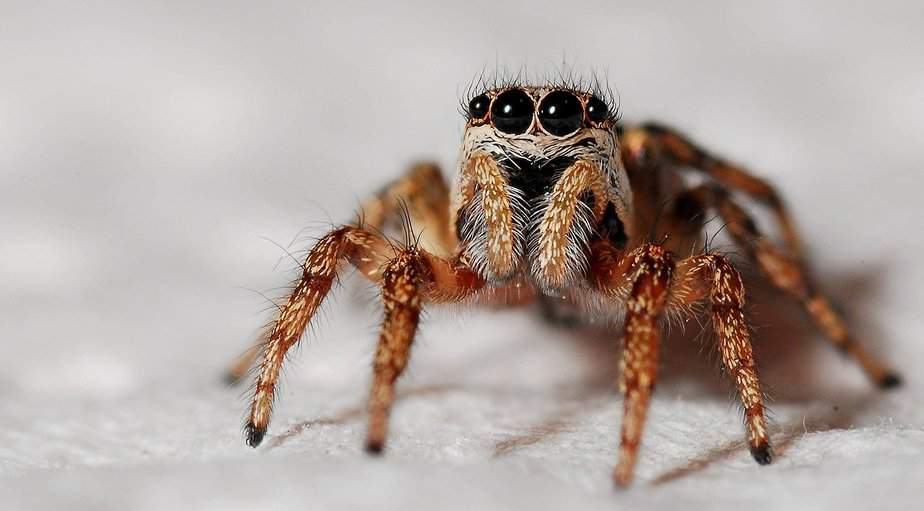 Anyone who takes a look into their basement or a rarely used corner in their at home will encounter a spider. But they are not only to be found everywhere – except in the Antarctic – they are also richly diverse. They are available in tiny to hair-raising sizes. They carry deadly poison and catch their prey with sophisticated hunting techniques. So we couldn’t help but present you the most exciting facts about spiders.

1. Spiders have blue blood – just like snails and octopuses.

2. Spider silk is liquid at the beginning and only becomes solid in the air.

3. Spiders only have muscles to pull their legs inwards. But some spiders do not have the opposite extensor muscles. Therefore, they move them outwards by pumping blood into them.

4. There are different types of spiders in which the female eats the male before, during or after copulation. The Black Widow is the best-known representative of sexual cannibalism.

5. Around 35,000 different types of spiders are known worldwide.

6. The Sydney funnel-web spider’s venom can be used after a stroke to prevent brain damage.

8. Some spiders live together on a web after mating.

9. Jumping spiders can even see the ultraviolet spectrum. Their highly developed eyes ensure that they can jump from branch to branch without fail.

10. The water spider (Argyroneta aquatica) spins a dense web out of its silk, which is used as a diving bell.

11. Antarctica is the only continent where no spiders exist.

12. Tidarren sisyphoides is a spider species of the family of tangle web spiders. The females of this species are one hundred times larger than males.

14. The Sydney funnel-web spider (Atrax robustus) is the most poisonous spider in the world. A dose of just 0.2 grams per kilogram of body weight is fatal to the victim.

15. New Guinea fishermen use the web of the golden orb-weaver (Nephila) for fishing because it is extremely tear-resistant.

16. In August 2008, the world’s largest spider web was discovered in Texas. In the Lake Tawakoni nature reserve, it spanned several bushes and trees and was built by around 250 spiders. It measures 180 meters in length.

17. The Colombian spider Patu digua is the smallest known spider in the world with a body size of up to 0,014 inches (0.37 millimeters).

18. Annually, more people die from being hit by a champagne cork than from the bite of a venomous spider.

19. In order to kill a spider, a woman in Kansas burned down her house.

20. The spider species Caeristris darwini spins the largest webs in the world. Their size can reach more than 30 square feet (2.8 square meters).

21. A bite of the Brazilian wandering spider can cause men an erection that lasts for hours.

22. The silk of the spider species Caeristris darwini is the toughest biomaterial in the world – ten times stronger than a comparable strand of Kevlar.

23. In order to better investigate the effects of a black widow’s poison, the scientist Allan Walker Blair voluntarily let the dangerous spider bite him.

24. The Huntsman spider (Heteropoda maxima) is the largest spider species in the world. Adult males usually have a span of up to 12 inches (30 centimeters). In Australia, a specimen estimated at 15.7 inches (40 centimeters) was discovered in 2017.

25. The spider species Amaurobius Ferox belongs to the genus of matriphages. This means that the spider female’s children eat their own mother after hatching from their eggs.

26. Martin Goodman – one of the founders of Marvel – thought Spider-Man was a bad idea because people do not like spiders.

28. The fear of spiders is called arachnophobia.

29. Bolas spiders do not spin webs to catch prey. Instead, they use a long line of silk ended with a spot of sticky glue. It contains pheromones to simulate a potential sexual partner for certain insects. If prey comes too close to the mucus ball, the bola spider moves the silk line to catch the prey animal, much like a fishing line.

30. The ogre-faced spider has developed a very special hunting technique. It weaves a net between ist four front legs and then dangles above places where prey are likely to pass through. If a prey is within range, it throws the net over it extremely fast.

31. With a leg span of up to 11.8 inches (30 centimeters), the Goliath birdeater (Theraphosa blondi) is the largest tarantula species in the world. It occurs exclusively in the tropical rainforests in northern Brazil, Venezuela, Guiana, and Suriname. If you would like to know more about Venezuela, we strongly recommend our facts about Venezuela.

33. There are about 300 species of spiders that can mimic the behavior, appearance or even fragrance of ants. Few of them deceive their prey in this way and then attack them from behind.

34. The largest jumping spider in the world is almost one inch (2.5 centimeters) long and can skip eight times its body length.

35. Jumping spiders weave a dense, non-sticky net under which they position themselves to being protected from bad weather like in a tent.

36. Jumping spiders do not use their silk to build a web, but as a tether when jumping.

37. Spiders are not insects, but arachnids.

38. There is only one known type of spider that has no eyes. Sinopoda scurion is a Huntsman spider and was discovered in a cave in Laos where there is no daylight.

39. Not all spiders have eight eyes. There are also some species that have only six, four or even just two eyes.

40. The spider species Cebrennus rechenbergi, also called cartwheeling spider, moves partly in a rolling flic-flac movement. It is then twice as fast as with normal movement.

Obviously, spiders are really impressive animals with outstanding abilities and we hope you enjoyed these crazy facts about spiders. Do you know any other facts that we should definitely mention here? Then hit the keys and just write us a message. We are looking forward to your input! Of course, we also have more fun facts to offer, which we have summarized in some books with the most incredible facts. Furthermore, simply stay up to date via our channels on Instagram, Pinterest, YouTube, Twitter or Facebook. We look forward to seeing you!