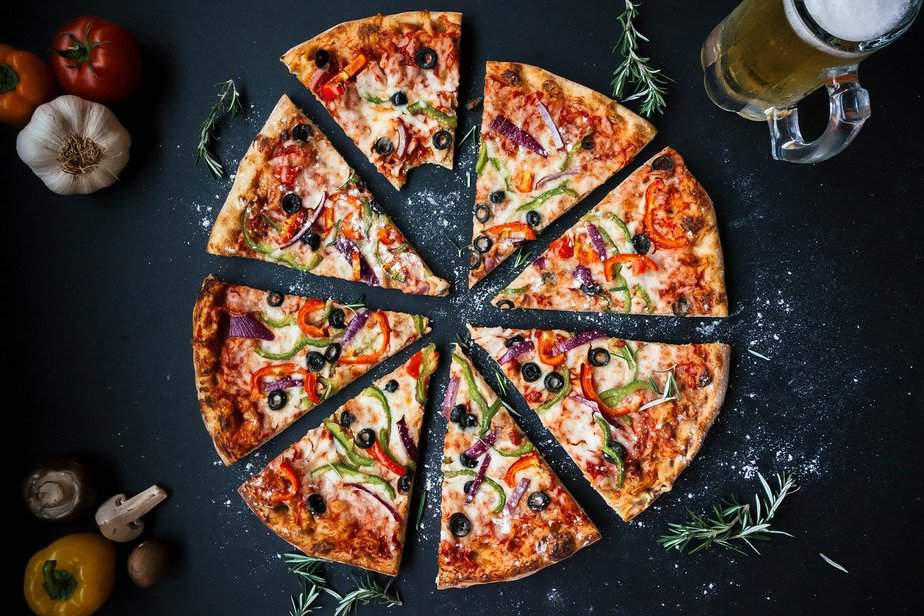 Interested in some cool facts about food? Just have a look at our 76 super delicious facts you won’t believe. Do you know which fruit was such a status symbol in the 18th century that you could even rent it for one day or do you know which vegetable has negative calories – meaning that it costs more calories to digest than you get from eating it? We tell you! By the way, we also published some books with our best fun facts so make sure to check them out if you are a fact junky as we are. And there is also our YouTube channel you can subscribe to.

1. The grapefruit was actually an accident. It was developed by chance from a cross between pomelos and oranges.

2. After John Pemberton was wounded in the American Civil War, he became addicted to morphine. In order to free himself from the drug, he developed his own painkiller, which he made from cocaine and alcohol. In 1886 he designed a non-alcoholic variant that was later sold under the name “Coca-Cola”.

4. In 2016, Pizza Hut delivered a pizza to the top of Kilimanjaro, setting the world record for the highest pizza delivery ever.

5. In order for ketchup to pass the quality control of the manufacturing company Heinz, it must run out of the bottle at a speed of 0.28 miles per hour. If the ketchup runs out of the bottle faster or slower, its viscosity (thickness) is not correct and it is therefore not sold.

6. Most airlines have a policy that the pilot and co-pilot of an aircraft are not allowed to eat the same meal in order to avoid the risk of both pilots suffering from food poisoning.

7. Chia seeds contain five times more calcium than milk and twice as much iron as spinach.

8. In order to die of a caffeine overdose, a person would have to consume about 100 cups of coffee in a very short time.

9. Due to reduced air pressure, water on Mount Everest boils at 158 degrees Fahrenheit.

10. In Cambodia you can buy pizzas with marijuana as a topping. It is called Happy Pizza.

14. There are just two people who know the recipe for Coca Cola. For this reason they are not allowed to be in a plane at the same time.

15. According to nutritional values, the daily requirement of vitamin B6 can be provided by 2.9 pounds Nutella.

16. After saffron, vanilla is the second most expensive spice in the world. In 2017, one kilo of black vanilla pods cost up to 600 dollars. Saffron of average quality costs up to 5,000 dollars.

17. One of the original ingredients of Coca-Cola was cocaine.

18. Celery has “negative” calories – it costs more energy to digest it.

19. The designer Ko Yang has invented a milk package that changes its color when the milk begins to spoil.

20. Araucana chickens are also referred to as Easter egg chickens, because their eggs can be blue, green, red or brown.

21. The mascot on the Pringles package is called “Julius Pringles”.

22. About 20 percent of all calories consumed worldwide comes from rice.

23. Because it was impossible to transport the ingredients needed for Coca Cola to Nazi Germany, the Coca Cola Company designed a beverage especially for the German market: Fanta.

24. The Italian chocolate brand “Italo Suisse” changed its name in 2013 to “Isis”. One year later it had to change it again because of the rise of the terror organization.

25. Ice cream manufacturer Ben & Jerry’s has a cemetery for discontinued ice cream varieties on its premises.

26. Rice has more genes than humans.

27. The area on earth, which is suitable for coffee plants to grow, is called the bean belt.

28. Eggs can explode in the microwave.

29. Blowing out the candles on a birthday cake increases the number of bacteria on the cake by around 1,400 percent.

30. The Pomato is a hybrid between a tomato and a potato. The plant produces both tomatoes and potatoes.

31. The long drink “gin and tonic” was invented by the British in the 17th century as protection against malaria. The reason for this is that until 1940, the quinine contained in tonic water was the only substance known to be effective against malaria. However, since this also causes the tonic water to taste bitter, the drink was mixed with gin to improve its taste.

32. Pizza Hut was the first pizza service to deliver a pizza to the International Space Station. In 2001, the company paid one million dollars to the Russian Space Agency for this promotional campaign.

33. Nutella was invented during World War II, when an Italian soldier mixed chocolate with hazelnut to stretch his food ration.

34. A pineapple was such a large status symbol in 18th century England that you could rent it for a day. If you like that fact we also have many other historical facts for you.

35. Because of the large amount of sugar in it, it is impossible for honey to spoil. Even in 1,000 years it would still be edible.

36. Peanuts are not nuts but in fact beans.

38. When cows eat too many carrots, their milk can turn pink. How about more animal facts?

39. Before coffee became popular, beer was served for breakfast in the USA.

40. As the water of a coconut is isotonic and sterile, it is used as saline solution in underdeveloped countries.

41. If Coca Cola was served without colorants, it would be green and not black.

42. While tomatoes are typically classified as vegetables, they actually belong to the fruit category.

43. Scientists have succeeded in creating a genetic strain of manioc that contains more iron and zinc than conventional plants of this type. The crop is a widespread food source, particularly in Latin America, and with this special breeding it could reduce the problem of zinc and iron deficiency in children within the region.

44. The “Blue Java” banana is a special type of banana with a blue exterior and a slight vanilla taste.

46. Walnuts contain just as much protein as eggs.

48. Carrots were purple until the 17th century. The orange color is only a specially cultivated form that has prevailed over the past few centuries.

49. In Pittsburgh there is a restaurant called “Conflict Kitchen”. It only serves dishes from countries the USA is in conflict with. When the restaurant started to serve dishes from Palestine the owners received death threats. We also have many other facts about the US for you.

50. If you cook a penguin egg, the egg white remains transparent after cooking.

51. In 1954 Bob Hawke, the future prime minister of Australia, set the world record by drinking 2.5 liters of beer in 11 seconds. Here even more Australia facts.

52. Cats cannot taste sugar. Or how about more facts about cats?

53. In 2010 a professor at the Kansas State University wanted to show his students that during a diet only the amount of calories is important, and not the nutrients. For two months he almost exclusively ate candy and lost more than 26 pounds.

54. Strawberries are not berries, but in fact nuts.

55. The Bourbon vanilla takes its name from the island of Réunion, where the black pods are grown. After the occupation by the French King Louis XIII, the island was called “Bourbon” after the name of his noble family.

56. It is assumed that the pizza Hawaii was invented in Canada. Get even more facts about Canada.

57. Scientists at the Chinese University of Hong Kong have shown that the protein lectin can help prevent the development of tumor cells, prevent viruses from multiplying, and even serve as the starting material for a cure for HIV. Since lectin is found in bananas and is responsible for the brown coloring of the fruit, the darkest bananas are therefore the healthiest.

58. The combination of a knife with a fork and a spoon is called spork.

59. The world’s largest vegetables grow in Alaska. The main reason for this is that in summer the sun shines for more than 20 hours a day.

60. Without bats, there would be no tequila, as bats play a crucial role in pollinating agave plants, from which the alcohol is won.

61. Grapes explode when you heat them in a microwave.

62. After the first drive-in was opened at McDonald’s in China, the system was so strange to the Chinese people that many people ordered their food from their car, parked their vehicle and then went to the restaurant to eat. What do you prefer? More McDonald’s Facts or more China Facts? Or both?

64. If you salt a pineapple, it tastes sweeter.

65. The avocado core is also edible and contains even more nutrients than the pulp.

66. In the 1940s, the Coca Cola Company developed a colorless version of Coca Cola specifically for the USSR.

68. Annually, more people die from being hit by a champagne cork than from the bite of a venomous spider.

69. In the 1990s, the Coca-Cola Company tested vending machines that automatically changed prices depending on the outside temperature. When it was particularly hot, customers had to pay more.

70. Water cannot go bad and yet there is always an expiration date on water bottles. The reason for this is that the expiration date does not apply to water, but rather indicates when the plastic bottle starts releasing chemicals into the water.

71. Kopi luwak is the most expensive coffee in the world. It is produced by feeding the beans to civets, which break down the bitter substances in the beans during their digestive process. The otherwise intact beans are collected after excretion and prepared for sale.

72. When physicist Niels Bohr won the Nobel Prize, the Carlsberg Brewery gave him a house right next to the brewery with a beer pipe leading directly from the brewery into the house. Until the end of his life, Niels Bohr could drink as much beer as he wanted free of charge.

73. During the Olympic Games in China, Usain Bolt ate only chicken nuggets, as it was the only meal he recognized from home. Ultimately, he won three gold medals with this diet.

74. Popcorn became a popular cinema snack in the United States during the global economic crisis because it was so cheap.

75. The “Drinkable Book” contains instructions on how to filter your water properly. At the same time, it consists of separable pages with integrated silver particles that can eliminate around 99 percent of the bacteria in contaminated water. Each book has so many pages that it can supply a person with clean water for up to four years.

76. “Snakes Venom” is the strongest beer in the world with an alcohol content of 67.5 percent. It contains more alcohol than whiskey.

link to What is and was the largest animal in the world?

Everyone knows Microsoft or at least their flagship computer software "Windows" or "Microsoft Office". But do you also know what "Xbox" stands for or why a guy named Mike Rowe was sued by the...