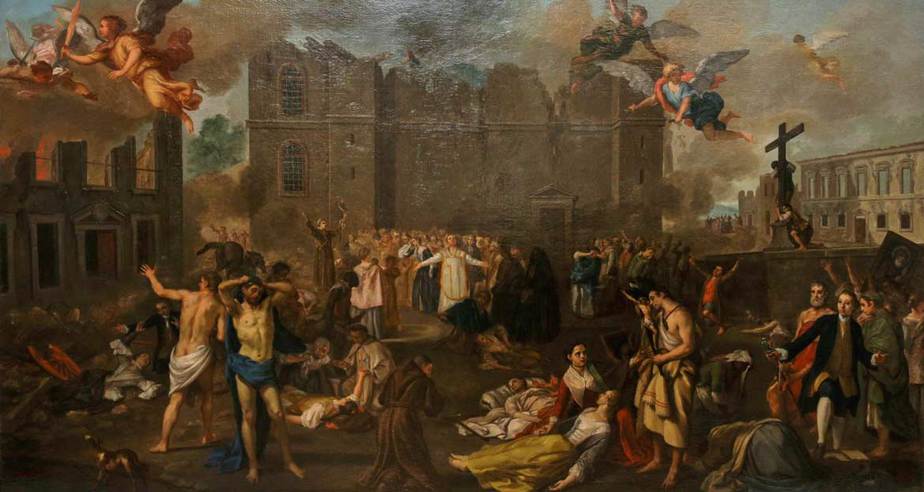 It is considered to be one of the greatest natural disasters that ever struck Europe and changed the attitude of the population profoundly, not only in Portugal. From then on, one question became engrained in every person of that time. Read here what exactly happened.

An earthquake destroys a whole city

According to historical reports, an earthquake struck Lisbon at 9:40 a.m. on All Saints’ Day of 1755, destroying large parts of the city. It is said to have lasted three to six minutes and to have torn cracks in the ground several meters wide. With a magnitude of about 8.5 to 9 on the Richter scale, nothing was able to withstand the natural disaster. Severe fires broke out all over Lisbon and numerous buildings collapsed. The earthquake was so strong that cities on the coast of Morocco suffered damage and the Caribbean islands were hit by waves up to four meters high.

Survivors of the earthquake fled to take shelter in the port, which was supposed to offer them safety. But that proved to be a mistake, as about 40 minutes after the end of the quake, a tsunami hit the city, sweeping even more people to their deaths. Although the water also served to put out the fires, countless buildings were unable to resist the force of the flood and collapsed.

To this day, it is not certain how many people lost their lives in this disaster, but it is estimated that about 30,000 to 100,000 of the 275,000 inhabitants in the greater Lisbon area were killed. 75 percent of all buildings were destroyed, including libraries, royal palaces, the opera house, and churches, as well as the city’s cathedral. One area of Lisbon, however, was spared and this fact would raise many questions in the further course of history.

What kind of god could allow that?

Unlike most parts of Lisbon, the city’s red-light district was largely spared from the earthquake. To date, scientists have not been able to explain exactly why this happened, but the most plausible assumption suggests that the sediment layers under Lisbon’s red-light district had a different texture than the ground inside the city, making the brothels more resilient.

For philosophers and theologians, however, this circumstance led to many critical questions. Not only the populace but also well-known literary figures such as Goethe or Kant began to ask themselves how an almighty God could allow such a thing to happen. Lisbon was the capital of a strictly Catholic country, All Saints’ Day was a high Christian holiday and yet the most important Christian buildings were destroyed in one fell swoop, while the brothels and drinking halls were spared. It was the beginning of a new theological and philosophical orientation in which people began to doubt God’s existence.