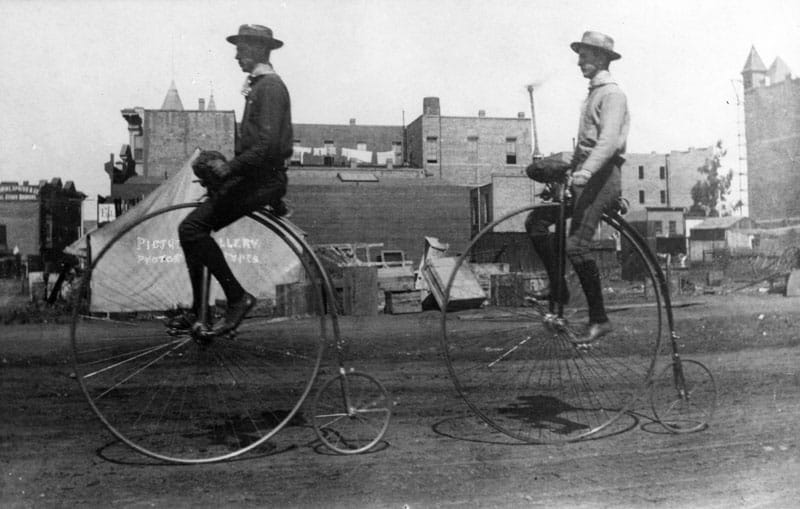 What would certainly not be worth a headline today, caused astonished faces in the 19th century. The British Thomas Stevens was the first person to succeed in circumnavigating the earth on a bicycle alone. How he succeeded and what he experienced in doing so, you can read here.

The path of a dreamer

When Thomas Stevens was born in Great Britain on 24 September 1854, he was the eldest son of a working class family. It became apparent early on that he loved sports and that there was a little adventurer and writer in him. His father emigrated to the USA on his own early on, with the plan being that the rest of the family would follow soon. But before this happened, Thomas Stevens’ mother fell seriously ill and his father returned to the family.

In 1871, however, Stevens himself had saved enough money to emigrate to the USA by himself, so he packed his belongings and set off on his adventure by ship. Two years later, his parents and brothers managed to follow him. But Thomas Stevens would never stay with his family for too long, and shortly thereafter he moved on to San Francisco, where he learned to ride a penny-farthing, one of the first types of bicycle.

The first circumnavigation of the world by bicycle

Without knowing it himself, Thomas Stevens began his first circumnavigation of the world by bicycle on 22 April 1884. That’s when he decided to ride his high-wheeler from the west coast of the USA to the east coast – a total distance of 5,953 kilometers. It took him 103 days to arrive in Boston, but once he had been bitten by the cycling bug, he could not stop there.

On his tour through the United States, he repeatedly wrote articles for magazines in which he described his adventures. This brought him to the attention of bicycle manufacturer Albert Pope, who agreed to finance a trip around the globe for Stevens, who, of course, couldn’t refuse such an offer. On 9 April 1885, Thomas Stevens left the United States with his bicycle and travelled by ship from New York to Liverpool, which he reached on 19 April 1885. A few days later he left the city with his bike and set off on his trip through Europe until he arrived in the region of what today is Turkey.

In Constantinople, he took a short break during which he was even assaulted. But he did not let that discourage him, and soon he set off to continue his journey to Tehran, Afghanistan and India. Despite further obstacles, Thomas Stevens managed to reach Shanghai, from where he continued his journey by ship to Japan. On 17 December 1886 he finally reached the destination of his exhausting journey – Yokohama.

How many kilometres did Thomas Stevens cover?

All in all, Thomas Stevens covered roughly 22,000 kilometers on his bicycle. When he returned to San Francisco by ship, he was admired and celebrated by the people of the city, and later he wrote a 1,000-page book telling of his adventures during the trip.