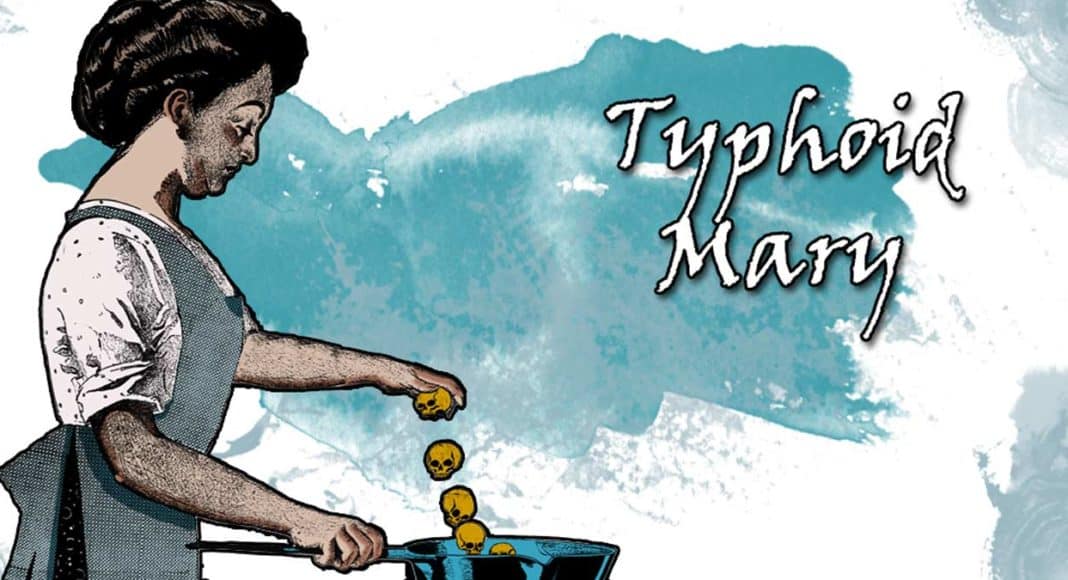 Typhoid Mary: How a Woman Killed Three People Without Knowing

At the beginning of the 20th century the Irish woman Mary Mallon, who became known as Typhoid Mary, became infected with typhoid fever and became the first person in the USA to become infected with the bacterium but did not contract the disease herself. Because of her unconsciousness, she infected over fifty people with the deadly disease, causing the death of three acquaintances and many serious infections. Too incredible to be true? Here is the whole story.

The life of Mary Mallon

Surely Mary Mallon’s parents would never have thought that their daughter, born on 23 September 1869, would later on be the cause of the death of three people. And if they had known, they would certainly not have sent their child to the United States at the age of 15. The family wanted a better life for her – far away from war-torn Europe. The first years in the US went better than expected for young Mary. She found a job and was able to afford a decent life.

At the age of 31 however, Mary Mallon began to work as a cook, and this is where her deadly fate would start to take its course. To this day it remains unclear where Mary Mallon contracted typhoid fever, but it is certain that it must have happened between 1900 and 1907. During this time she was working as a cook in New York City and 53 people in her immediate vicinity contracted typhoid shortly after they had come into contact with Mary.

A great cook but with a dark secret

When she started working as a cook in a house in Mamaroneck, several inhabitants of the house fell ill with typhoid fever within only two weeks. Fortunately, no one died. But fearing that she might infect herself with the disease – Mary didn’t know that she was the carrier of the bacterium – she changed employers. She moved to Manhattan and cooked for a family that shortly afterwards also started to suffer from fever and diarrhea. The family housekeeper also fell ill and even died shortly thereafter.

Fearing the disease, Mary left again and from then on worked for a lawyer. Within a very short time, seven of his eight family members contracted typhoid fever. By now Mary had overcome her fear of the disease and tried to help the lawyer’s family. She cared for the sick family members for months, thereby continuously worsening their condition.

After several months, Mary again changed employers and moved to Long Island. It wasn’t long before four of the ten family members fell ill. To this day it is unknown exactly how many people Mary Mallon infected. The best estimates put this number at 53 persons, three of whom died.

George Soper found out the secret of Typhoid Mary

It didn’t take long for the first investigations to begin as to why so many people were falling ill with typhoid fever. One of Mary Mallon’s employers hired sanitary engineer George Soper to investigate why his family had been infected with the disease. It did not take long for Soper to identify Mary as a possible source of the disease. When he confronted her, however, she became angry and ended the conversation. George Soper was therefore unable to obtain a necessary urine and stool sample and it remained unclear whether he would be proved right.

Soper even published his theory in the Journal of the American Medical Association and continued to try to persuade Mary to have herself examined, but his efforts were unsuccessful. At the same time, Mary Mallon received support from a regional pharmacist who examined her and decided that she could not be the carrier of the bacteria.

Nevertheless, George Soper remained persistent and in the end the New York City Health Department decided to investigate the case. Doctor Sara Josephine Baker was sent to Mary Mallon to examine her. Mallon began reacting irritably to the matter and even believed she was being persecuted by the state authorities. The Health Department therefore had no choice but to call in the police and have Mallon, now known as “Typhoid Mary”, taken into custody.

The end of Typhoid Mary

A health inspector discovered the typhoid pathogen in her, and Mary was placed in hospital isolation for three years. She was forbidden from ever working with food again, but Mary ignored the instructions and began working as a cook again in 1915. Unfortunately, her first new employer was New York’s Sloan Hospital, where Mary infected 25 patients. She was therefore taken into custody again and remained in isolation until the end of her life.

Until her death, Mary received visits from journalists from all over the world, none of whom were infected, fortunately. When she died of pneumonia at the age of 69 – typhoid fever never affected her until the end of her life – an autopsy was performed on her, confirming that her gall bladder indeed contained living typhoid bacteria. For safety reasons, her body was cremated and buried in a cemetery in the Bronx.

24 terrible facts about the Holocaust

After Adolf Hitler took power in the Third Reich, a time of terror began for the Jewish community in Germany and later...
Read more
Facts

Josef Stalin was one of the most influential politicians of all times and certainly one of the cruellest. But did you know...
Read more

How three cops caught ALL of Michigan’s drug dealers by inviting...