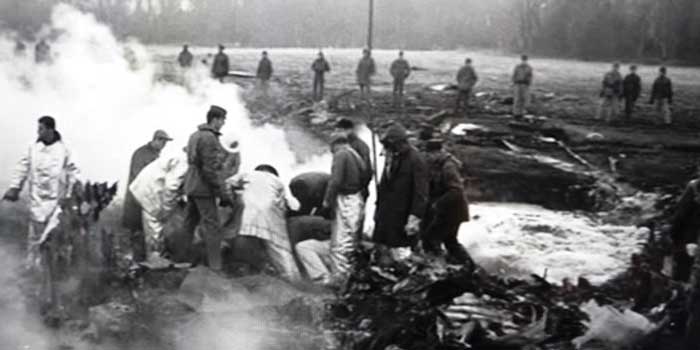 There are many lucky coincidences in the history of mankind: The discovery of America, the development of penicillin, or the incredible side effects of Viagra. We can consider ourselves lucky for each of these coincidences, but very few people know that a similar event occurred on the east coast of the United States in 1961, saving the lives of millions of people.

A plane crash with happy ending

It was the night from 23 to 24 January 1961 when, around midnight, a US Air Force B-52G bomber was flying over North Carolina and was to be refueled by another airplane mid-air. Normally, this should have been a routine exercise, but on this night, things would be anything but routine. The crew of the tanker aircraft realized in the dark that the B-52G was losing kerosene from one of the fuel tanks in the wing of the aircraft and reported this to the ground station.

In order to avoid a more serious accident, the ground station decided to keep the B-52G circling the coast until the aircraft had consumed most of its fuel. However, as the leak got bigger and bigger and the aircraft lost about 17 tons of kerosene within three minutes, the pilot was ordered to head back towards the runway of Seymour Johnson Air Force Base. But as the airplane continued to lose altitude, the crew lost control of it and had to abandon the airplane by parachute. Most of the crew survived the crash, but two crew members died during the mission.

Even while they were landing, the crew witnessed how the plane broke apart before the collision, causing the two hydrogen bombs on board to fall to the ground. Fortunately, the parachutes of the two bombs opened, so that the east coast of the United States barely escaped one of the biggest catastrophes since the end of the Second World War that night.

The search for two bombs

Because of their parachutes, the two bombs landed on the ground largely undamaged. One of them, however, revealed that only one of the four safety devices installed remained intact, meaning that the bomb had almost detonated. The explosive power of this hydrogen bomb was 250 times greater than that of the atomic bomb dropped on Hiroshima, and it would have destroyed or killed everything within a 14-kilometer radius with a probability of almost 100 percent.

The second bomb, on the other hand, landed in a muddy area, which made salvaging it almost impossible, so that parts of the bomb – including the uranium and plutonium used – can still be found today.

The world escaped a huge disaster that night, but unfortunately incidents like the one in Goldsboro are not all that uncommon. History is full of incidents in which a nuclear bomb almost exploded. In 1966, for example, there was a similar incident in Palomares, a small town in Spain, and two years later another incident occurred in Greenland, in which four hydrogen bombs were being transported on a plane that crashed.