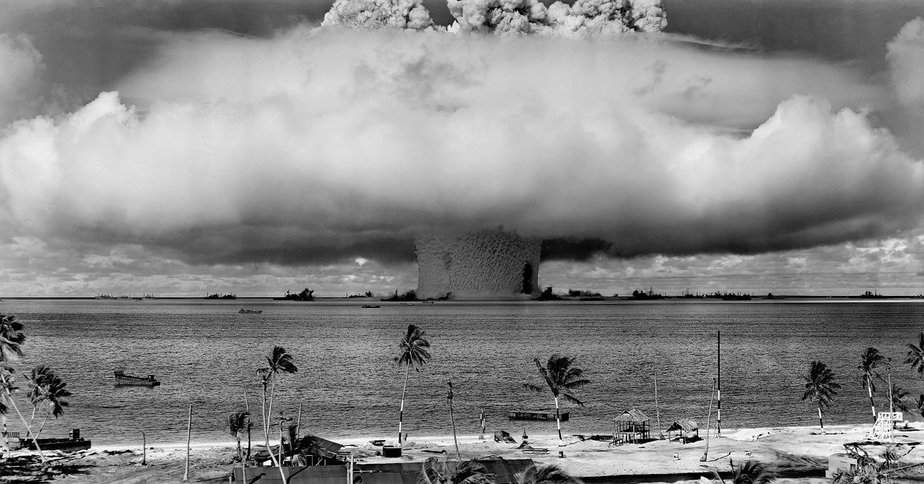 When the Americans detonated the first hydrogen bomb as a test on November 1, 1952, it was the most violent explosion ever seen at that time. Ivy Mike detonated as if 10.4 megatons of TNT had been blown up, 750 times that of the Hiroshima bomb. Nine years later, Vanya exploded in the sky – and shook the world.

An island disappears due to a hydrogen bomb

Such beautiful names for such terrible weapons. Under other circumstances, you might think that Ivy Mike and Vanya might be the names of cute little puppy dogs or kittens. However, they are hydrogen bombs, and two of the largest that have ever been detonated in tests. A hydrogen bomb is a nuclear weapon with the most powerful destructive potential.

On 31 January 1950, US President Harry S. Truman gave the order for US forces to develop an extremely dangerous bomb in response to the Soviets’ first nuclear test the year before. Within seconds of its explosion, a mushroom cloud measuring five kilometers in diameter had formed. Minutes later, the mushroom reached a width of 150 kilometers and a height of 43 kilometers.

The Pacific island of Elugelab in the Enewetak Atoll, 4,000 kilometers east of the Philippines, was literally blown away for test purposes. Everything within a ten-kilometer radius was swept away by the gigantic shock wave.

From 1948 to 1956, the Americans tested 44 different types of bombs here, so that the region is now highly contaminated with radioactivity. No wonder, since Ivy Mike’s fireball produced all the elements of the periodic table that were known at the time – and including some that were previously unknown. Normally this only happens inside stars. After the detonation, F-84 jet aircraft flew into the cloud to collect samples and were thus able to detect Einsteinium and Fermium for the very first time.

But why do hydrogen bombs exist at all? Quite simply: their explosive force is greater, which is due to the fact that conventional atomic bombs only detonate, thereby splitting atomic nuclei. In hydrogen bombs, on the other hand, a core meltdown occurs in which the nuclei of the hydrogen isotopes deuterium and tritium fuse together. But how does such an explosion unfold?

Nuclear tests and their aftermath

An atomic bomb is needed as a detonator, which is triggered by a conventional chemical explosive. This produces X-rays that are so hot that they heat the thermoplastic polystyrene and convert it into plasma. The volume of the plasma compresses the fusion material, which initiates the nuclear fusion of the hydrogen isotopes. This releases so much energy that the bomb explodes.

Nuclear weapons tests have existed since the summer of 1945. They are mostly carried out on uninhabited atolls in the Pacific, but in the past there have also been occasional tests in populated areas. In 1960/61, France carried out tests in Algeria, where approximately 30,000 people continued to suffer from the consequences of nuclear radiation for a long time. China, Great Britain and Russia have also carried out tests in inhabited areas in the past. And the destructive force was not exactly low in all of these tests – although no comparison to Ivy Mike. And Ivy Mike was nothing compared to Vanya.

4,000 times the size of the Hiroshima and Nagasaki bombs

Vanya, technically named AN602, was a Soviet-developed hydrogen bomb that was detonated on 30 October 1962 on the Arctic Ocean island of Novaya Semlya – the largest nuclear weapons test in history.

Vanya was developed by Andrei Sakharov, an extremely talented physicist who, however, completely reversed his opinion on nuclear weapons in 1955, when the first death occurred during a nuclear weapons test. Sakharov turned against the Soviet Union and became a dissident. Vanya, however, continued to be developed by other Soviet researchers. Soon, its nickname was the “Tsar Bomb” and the force of its explosion was unimaginable.

57 megatons were measured, corresponding to about 4,000 times the amount of the atomic bomb dropped on Hiroshima on 6 August 1945. A bomb with this explosive force consisting of TNT would have to have a diameter of 400 meters.

Three times around the globe

Vanya was detonated at a height of four kilometers and the fireball was so enormous that it reached down to Earth. The mushroom cloud raced up to an altitude of 64 kilometers and reached stability between 40 and 50 kilometers. The shock wave that followed the detonation of the hydrogen bomb traveled around the world three times – even though the third round could only be detected by highly sensitive barographs. And despite the explosion at a height of four kilometers, seismic waves were triggered in the ground. Some primary waves were still measurable on the other side of the Earth. Never has mankind triggered more violent geoactivities on Earth than on that date, 30 October 1962.